As a continuation of my look into the effect of estrus on lap dancers' livelihoods, I checked out a paper titled Women's voice attractiveness varies across the menstrual cycle (R.N. Pipitone, G.G. Gallup Jr; 2008), which brings to light one of the non-obvious effects of the regular menstrual cycle on women's physiology.

In this study, voice recordings of women were recorded through their menstrual cycle, and then rated by attractiveness. In naturally cycling women, the samples showed a significant increase in attractiveness during the part of the cycle in which conception was more likely (for women using hormonal contraceptive products such a variation did not exist — as is the case with the tip earnings of lap dancers!). This study was motivated by research indicating that human behavioral characteristics have a correlation with the variation in the sound of the person's voice. 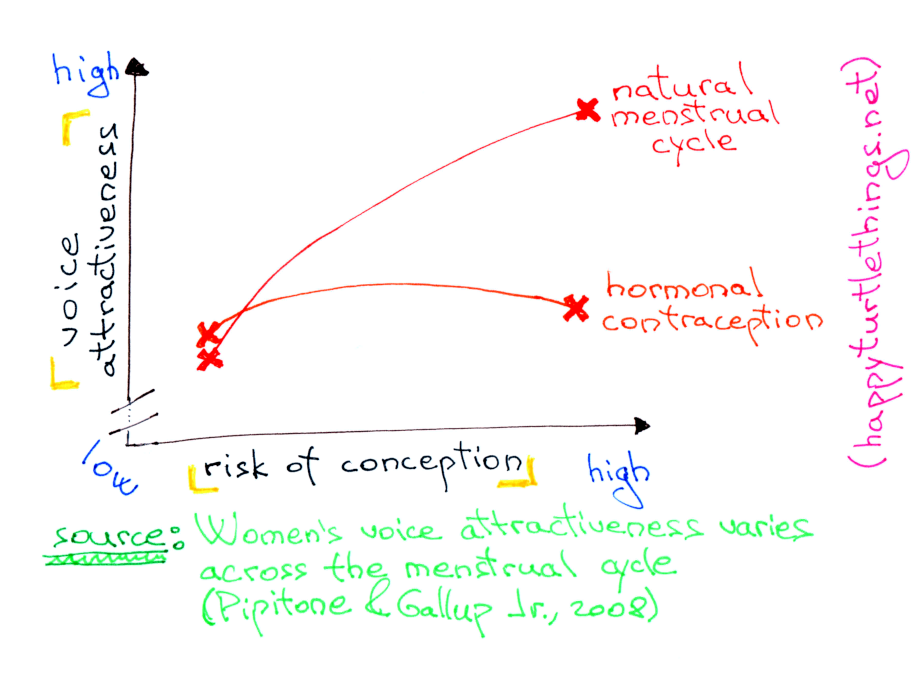 The morphology of the larynx, the hormonal organ responsible for the human voice, is affected by gender-specific hormones during puberty, altering the quality of voice in women and men — also, some research exists that indicates that there may exist a correlation between not only the characteristics of a person's voice and their physical morphology, but also their sexual behavior! Specifically, in this case, naturally cycling women have more jitter and shimmer in their voices, and their voice pitch increases during ovulation.

The volunteers who rated the attractiveness of women's voices were asked to rate samples from four equidistant points in a woman's menstrual cycle. After completing the evaluation, they were informed that all four samples belonged to the same woman — which came as a shock to the great majority of them! Similar results were reported by both female and male raters. No acoustic analysis was performed, as it appears to be difficult to pinpoint the acoustic differences between attractive and unattractive voices.

Moral of the story: avoid being catfished by conducting voice calls. Also: we are all programmed by our hormones, choice is an illusion.

Dog fleas can jump higher than cat fleas. In other news, scientists have the strangest hobbies.

What's more dangerous in a fight, full beer bottles or empty beer bottles? And what do physicists do when drunk?