An ambitious project of Pigeons' discrimination of paintings by Monet and Picasso (S. Watanabe, J. Sakamoto, M. Wakita; 1995) promises to entertain and teach, and doesn't disappoint on any step of the way. Many characteristics of an artist's work cue to the authorship and period of production, so even a laic can differentiate between the art made by two artists with very different modes of expression — Picasso and Monet. In fact, even pigeons can tell the difference.

Previous to this paper, it was proven that pigeons are capable of discriminating between the musical works of Bach and Stravinsky, but the question to be answered was whether a similar principle can be applied to the visual arts, as well. Previously, pigeons had been successfully trained to respond to images that contained humans, and not to respond to those that didn't (additionally, they transferred this discrimination to real objects!), so critiquing art presumably wouldn't be such a stretch. In paintings such as the one by Monet, real world objects can be easily identified, which is mostly not the case in the famous works of Picasso. Another question the authors asked was whether realism (the connection to the real world, such as in Monet's paintings) matters to a pigeon. 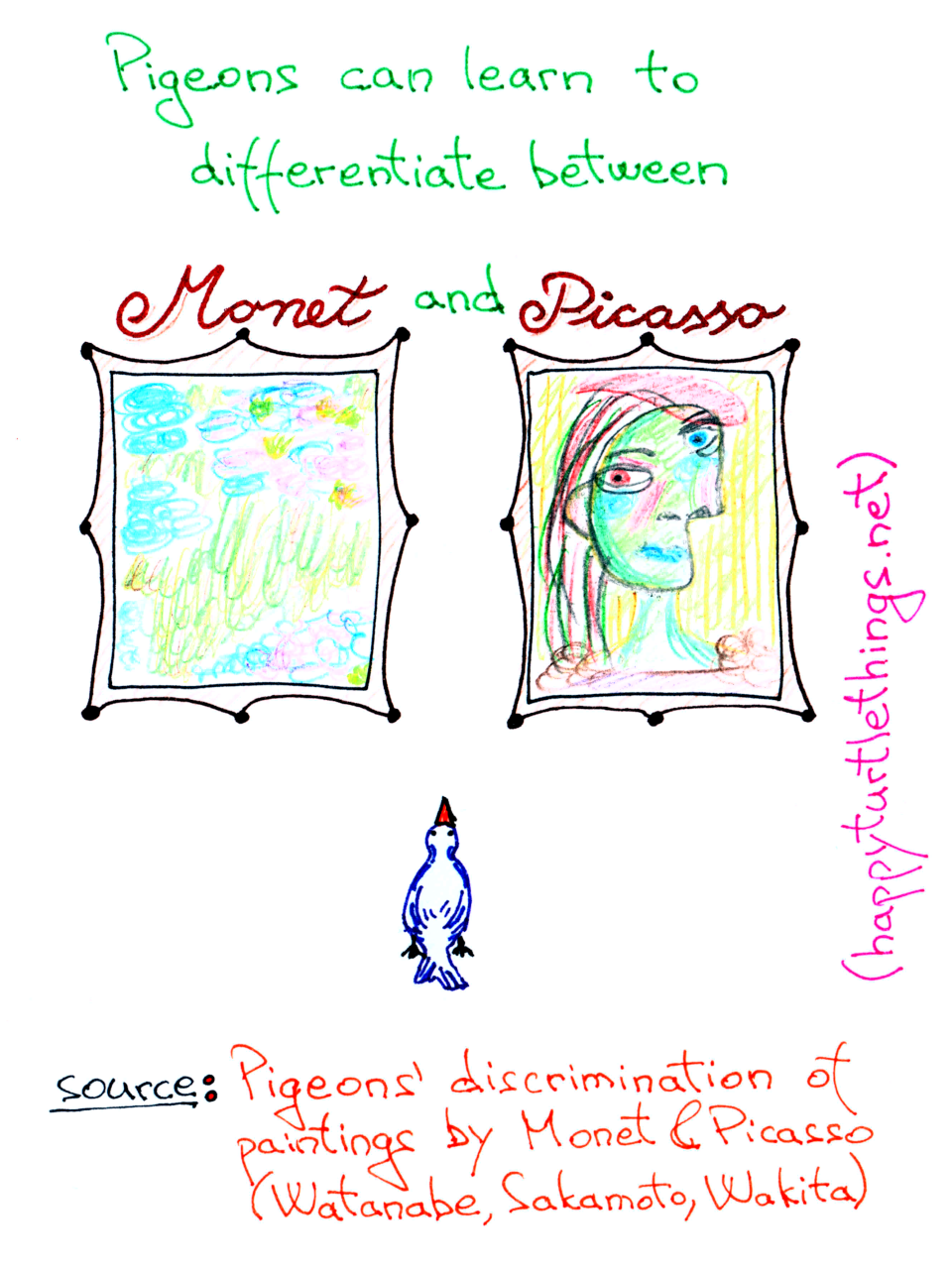 The pigeons used were (divided in two groups and) first trained to recognize the paintings by either Monet or Picasso, for which they were rewarded with food. After learning to recognize these paintings, the food rewards were removed, and the pigeons continued to peck at paintings by the author they were trained to recognize without any reward. Then, the birds got tested on their recognition skill — some of the paintings were presented to them in grayscale and out of focus, so as not to hint at the author by the color or sharpness of lines used, and the images were sometimes presented left-right reversed or upside-down, while the poor things had to decide whether it was Monet or Picasso they were looking at. Additionally, the pigeons were tested on paintings by similar artists (Cezanne and Renoir for Monet, and Braque and Matisse for Picasso).

Even though these tests presented a substantial difficulty for the subjects, they could still choose the right artist (or style) in the great majority of cases! An evident decrease in the percentage of successful discrimination existed with Monet's paintings that were altered or spatially reversed — presumably, this is because real world objects are easier to recognize on a Monet painting, than they are on one of Picasso's. It was also proven that pigeons are able to learn category and pseudocategory discrimination by recognizing impressionist or abstract paintings, as well as discriminating between the two styles. The next time someone tells you they're not all that good with arts, you can freely tell them that even pigeons can do it.

Even wondered... what the hell is this navel fluff? Wonder no more, scientists have gotten to the bottom of this!

Don't feel bad if learning a foreign language seems hard — you're at a disadvantage already, your brain has retired.