What we know as human society is held together by interpersonal relationships – on one hand, it's the give-and-take equilibria between persons or social groups and the expectations of reciprocally beneficial behavior, and on the other, the feelings of closeness, trust, and personalistic self-disclosure.

The study I'm about to present to you is something you have probably already seen floating around the internet, said to hold the key to forming close personal relationships in a few dozen carefully designed discussion questions. Let's start with the basics. Is it overblown? Yes and no. The study I'm referring to is the Experimental Generation of Interpersonal Closeness: A Procedure and Some Preliminary Findings (A. Aron et al.; 1997), and in it the authors present a superficially reliable-looking method of creating close relationships. Id est, interpersonal relationships of two strangers who end up reporting a substantial amount of closeness in their relationship after a guided 45-minute conversation. But it's a far stretch to say that such an accomplishment truly creates reliably long-lasting relationships, regardless of the immense immediate effect.
Most of this research paper is dry, scarce with information, and devoid of enthusiasm (not all of it, though!), so to get to its main points without giving up on social science and friendships in general, I recommend opting for my summary instead. 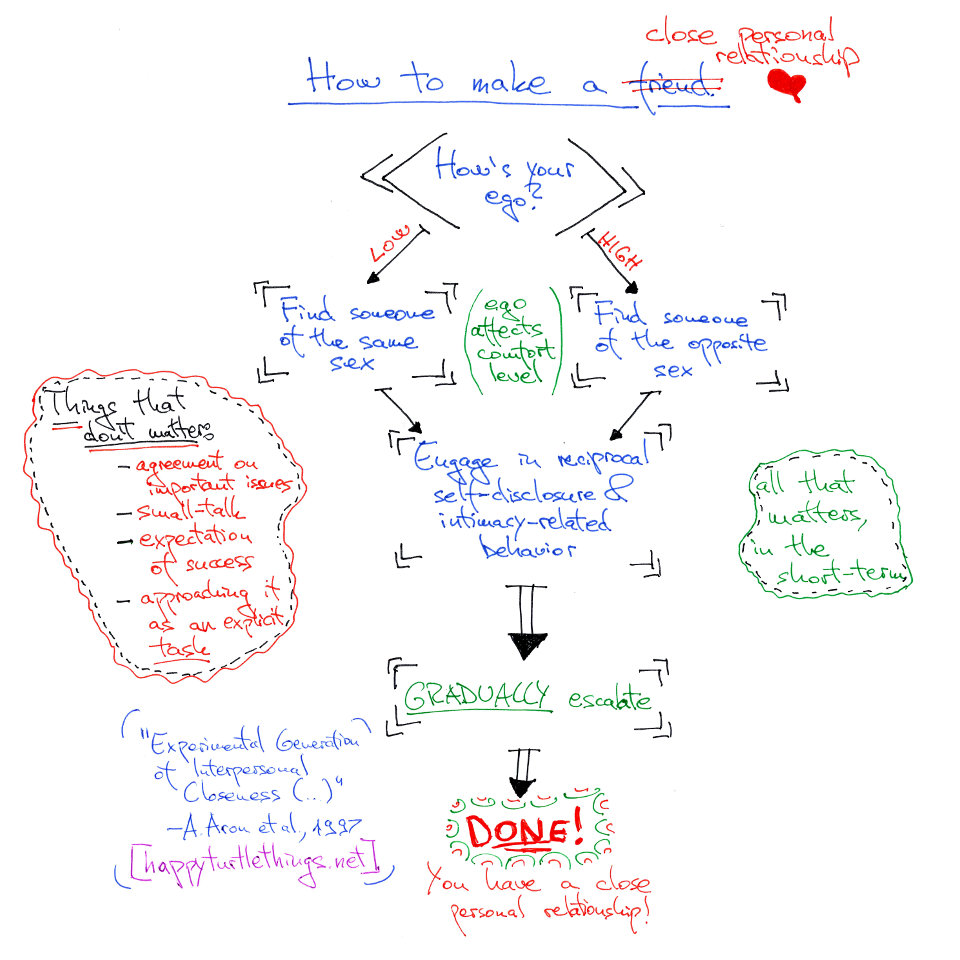 In short, the chief idea of the research presented in this paper was the experimental generation of close interpersonal relationships. As you can imagine, experimenting on actual, naturally-forming close relationships does bring up some ethical questions... but making strangers like each other and then playing with their relationships apparently doesn't! There are two conclusions you can already reach through this – psychologists really like playing god, and you should try to avoid being one of their test subjects.
To define closeness, or intimacy of a relationship, they use something called "the inclusion of other in the self," which represent a state in which each subject of a relationship feels their innermost self to be validated, understood, and cared for by the other. Some other definitions of closeness — such as the one I would use for friendships — take interpersonal closeness to include behavioral interaction. In other words, the time spent together and common activities undertaken – behaving close. However, most can agree on closeness having to involve some aspect of feeling close to have any chance of enduring and improving.

These manipulative geniuses chose a handful of university-level psychology classes early in the semester, divided the student volunteers (who didn't know each other) in pairs, and asked them to engage in an exercise designed to increase their closeness. They modified some of the pairings and introductory information, and looked at how this may influence their results. Before getting right onto the results, let me inspire you by mentioning that in their preliminary study on stranger pairs going through a similar exercise, most reported a high postexperiment rating of closeness, and one of the couples even got married. (Psychologists playing god.)

The exercise that the student strangers engaged in involved 36 questions divided in three sections and designed to make them discuss gradually more personal feelings and experiences on everything from childhood memories, hobbies, and daily life. After just 45 minutes (each 12-question session was capped at 15 minutes), they were asked to report on the closeness of the relationship they had just developed with this (until-recently) stranger.
The experiment proved to be extremely successful.

If you want to try it yourself with a consenting stranger, you can find the whole procedure documented on pages 12 and 13 of the original paper (here), or on about a million internet pages with cringy and deceitful titles.

Things that made no difference in the success of the experiment:

That's it. Seriously. Compared to a survey on the closeness of the "closest, deepest, most involved, and most intimate relationship" given to a similar group of students, the closeness achieved by this experiment overshot that which was reported in the survey by about a third of the students. Does that mean that some close, naturally-forming relationships don't get nurtured as lovingly as was achieved in a 45-minute conversation?
When considering these results, keep in mind that the experiment was designed to provide just a temporary feeling of closeness, not a long-lasting relationship. 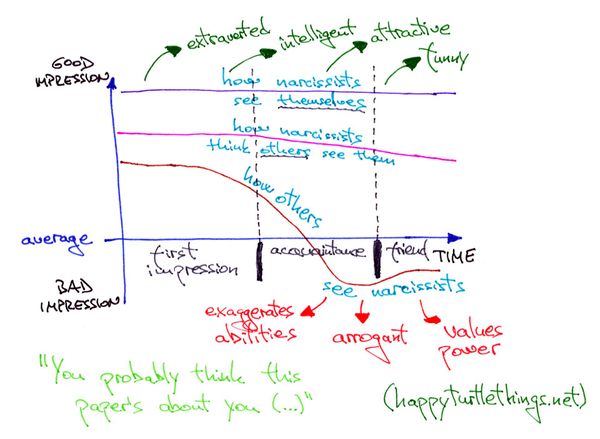 It turns out narcissists are able to charm the socks off of anyone they meet — if they feel like it — but not more than that. Stick around for an overview of the narcissists' arsenal and the scientific observation of how nice guys — spoiler alert — really finish first. 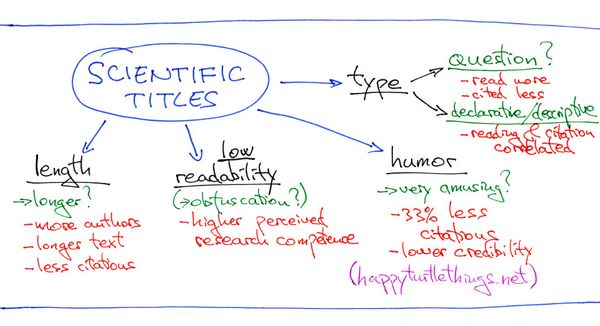