Narcissism is one of those epithets nobody wants to earn — it's a character trait highly associated with vanity and egoism, brandished by the people we tell ourselves we would never think to consider as friends. But what does the observer know about the experiment they're in?
It turns out narcissists are able to charm the socks off of anyone they meet — if they feel like it — but not more than that. Stick around for an overview of the narcissists' arsenal and the scientific observation of how nice guys — spoiler alert — really finish first.

As a personality type (as opposed to a clinical diagnosis), Google Dictionary agrees with scientific literature and defines narcissism as

extreme selfishness, with a grandiose view of one's own talents and a craving for admiration.

Keeping the clinical diagnosis out of the game, all of the research I will present here focuses on the sub-clinical narcissist; the friend, neighbor, coworker, or acquaintance who just might not be the kindest guy you've ever met. Clinically, the narcissistic personality disorder may be diagnosed in people who exhibit the following symptoms:

but that's way too cumbersome to deal with in large-scale studies that investigate the general notion of narcissism.
The handy tool used by most psychologists to discover and characterize narcissistic traits is called the Narcissistic Personality Inventory (R. N. Raskin, C. S. Hall; 1979), it examines the symptoms of narcissistic personality disorder, and in its full form it consists of 40 pairs of statements from which the interviewee is asked to choose the one that better reflects their personality.

For practical purposes, you can save yourself the trouble — narcissists (people who score highly on the Narcissistic Personality Inventory test) tend to look neat and wear expensive, flashy clothing. In fact, the study Portrait of a narcissist: Manifestations of narcissism in physical appearance (S. Vazire et al.; 2008) hints at exactly that: you might be able to guess at narcissistic personality traits of a person just by looking at them.

And if you're feeling particularly adventurous, you can find the Narcissistic Personality Inventory test here.
Are you narcissistic? I'd love to know.

Another common personality trait model that you might have heard of is the Big Five. In this model, personality is described in five sectors, using common language: 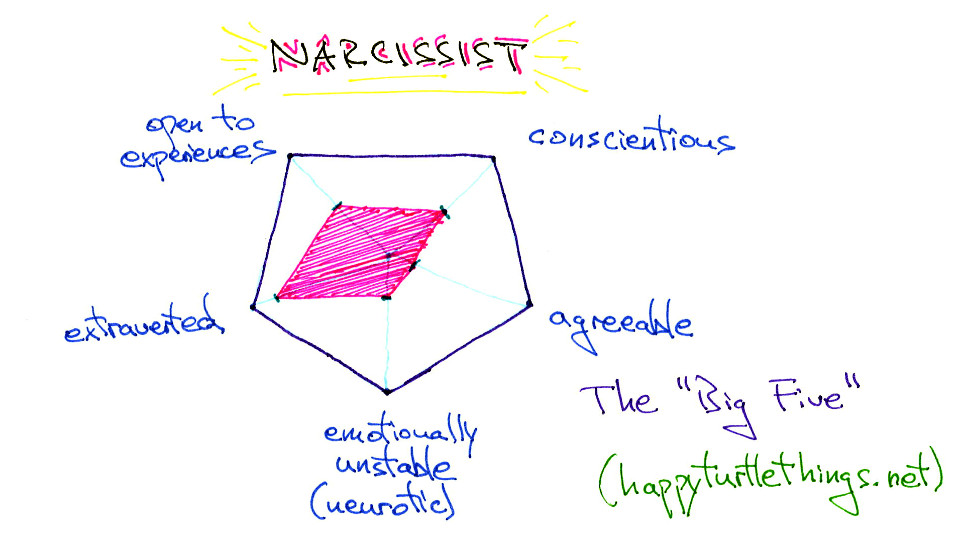 It's commonly shown that narcissists score very high on extraversion and low on agreeableness. (For the reader who's diligent and has much more free time than I do, here's the Big Five test in a convenient format.)

Why should we care?

Wouldn't it be great if everyone was judged accurately, based on merit and effort?

Narcissists are incredibly successful at leaving good first impressions. The authors of the paper Why Are Narcissists so Charming at First Sight? Decoding the Narcissism–Popularity Link at Zero Acquaintance (M. D. Back et al.; 2010) had a large group of volunteers interact and judge each other's personalities — following that, they varied the amount of information available to the volunteers: from a video recording to a photograph of the clothes worn by the individuals. Narcissists came out on top! They were able to charm in any form available. Additionally, in many studies (example) they are even rated as more attractive at first glance!

However, the thing that's really strange is how The performance of narcissists rises and falls with perceived opportunity for glory (H. M. Wallace & R. F. Baumeister; 2002). If they are promised a reward for doing a task well, narcissists will try harder and score better than the average. But if there's no reward involved... yep, lower than average. The effort they put into a task varies depending on the potential admiration they might earn from others — if the task is presented as very challenging, they will try at it even harder.

Following that, it shouldn't be surprising that in most cases, in groups of newly-acquainted peers, it will be the narcissists that will come out on top as leaders. The same regularity may be applied to many hierarchical structures — at-first-glance charming narcissists are often determined as leaders in groups of executives.
You can find more on this chilling finding (that may or may not explain a lot about everything from your boss at work, to the world political situation) in the paper titled Leader Emergence: The Case of the Narcissistic Leader (A. B. Brunell et al.; 2008).

Downsides to being a narcissist?

Quite a few, actually. 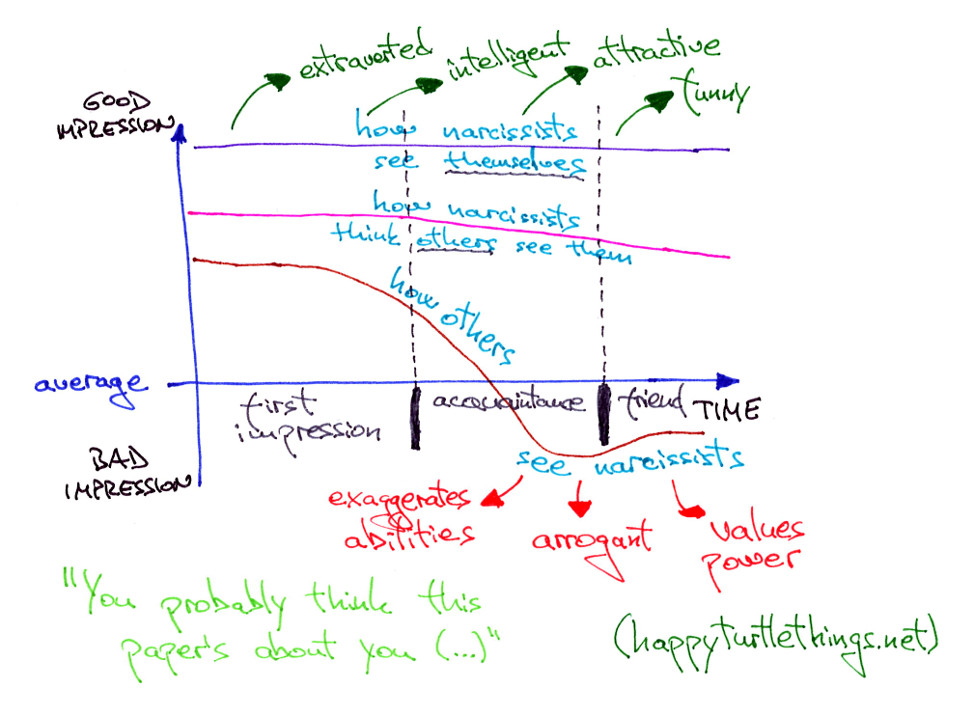 Nope!
Every dog has its day, and as narcissists' reputation dwindles and they are seen as more exploitative and less charming, those with low Narcissistic Personality Inventory scores come on top.

As mentioned above, narcissists score very high points with the people they'd just met... but over time, that opinion drops. This may be due to the illustrations of the narcissists' negative personality traits, but it may also be due to the switching off of the charm. If there's no new admiration to gain from the relationship, is the relationship really worth it for them? Indeed, this pattern seems likely.

Additionally, your relationships with others tend to be more enjoyable if your impressions of how they feel about you agree with their actual feelings; regardless of whether the impressions are good or bad! So narcissists are definitely out of luck there.
For more on this topic and many mental cartwheels, take a look at the paper Meta-accuracy and relationship quality: Weighing the costs and benefits of knowing what people really think about you by E. N. Carlson (2016) — and then let me know how the cartwheels are going for you. :)

What should you take out of this? Charm fades, not all that looks cool is gold, and slow-and-steady wins the race. 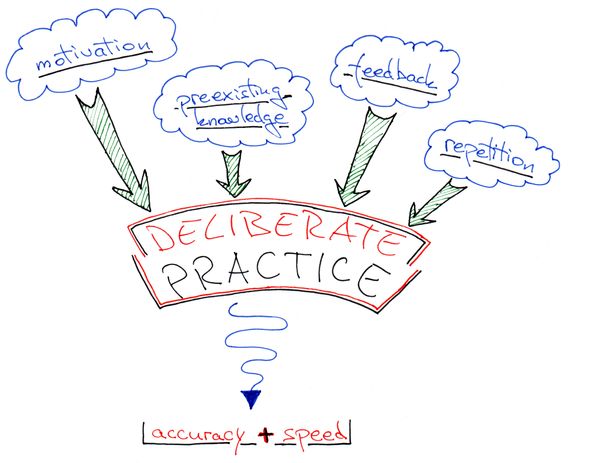 You've picked out something you want to get great at and you're practicing diligently? ... You're sure you know what you're doing? Taking a peek at the science of deliberate practice might help you not fail miserably! 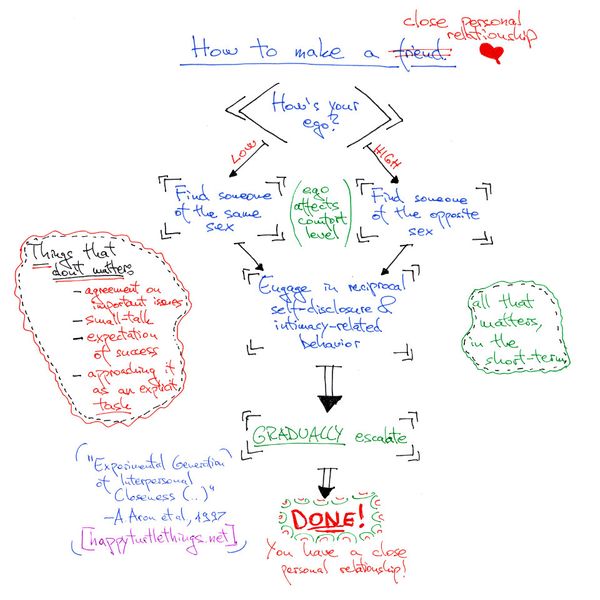 Believe-it-or-not, we actually know exactly how to create friendships in the lab!